Turning the spotlight on oil and gas transitions at COP26

Drastically cutting down greenhouse gas emissions from fossil fuels is critical if we are to limit global warming to 1.5 °C. While world leaders have acknowledged the need to accelerate coal phase out – including a historic pledge by nearly 200 countries at COP26 – and progress has already been made, phasing out oil and gas is still a controversial topic in climate negotiations.

Oil and gas were largely absent from the official UNFCCC schedule of side events this year, and they are not mentioned in the final Glasgow Climate Pact, due to opposition from major producing countries. However, the science is clear. According to the IEA’s Net Zero Roadmap released in May 2021, all countries will need to stop exploring new oil and gas fields this year, for the world to stay on the very narrow path to 1.5°C

An enormous challenge lies ahead of us. Oil and gas must now be regarded as the next frontier for climate mitigation.

In contrast to the official negotiations, different initiatives ensured that oil and gas were not overlooked at the summit, including events organised by our Oil and Gas Transitions (OGT) programme, daily meetings and coordinated campaigns by the Global Gas & Oil Network (GGON), announcements by the Fossil Fuel Non-Proliferation Treaty (FFNPT), and the launch of the Beyond Oil and Gas Alliance (BOGA) chaired by Denmark and Costa Rica.

Below is a summary of OGT’s presence at COP26.

Event: Oil and Gas as the Next Climate Frontier: Just Transitions from Black to Green

Organised by: Climate Strategies, SEI, The State of Green and Carbon Tracker 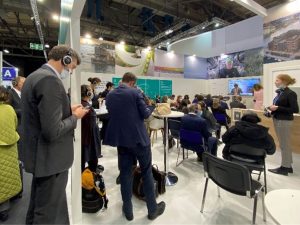 During the second week of COP26, OGT hosted a well-attended event at the Danish Pavilion focused on the opportunities and challenges for a just transition of the oil and gas sector, particularly, from the perspective of three countries with the potential to become first-movers: Denmark, Norway and the UK. These three countries are expected to play a pioneering role in the transition, but only Denmark has so far committed to phasing out production. Our event explored the role of various actors in this transition, highlighting the leadership role of Denmark at national and international level.

We also launched three new reports looking at the opportunities and barriers for oil and gas just transition in Denmark, Norway and the UK/Scotland, and announced a call for papers for our special issue in the Climate Policy Journal: “Net Zero Oil and Gas Value Chains: Just transitions by 2040”. 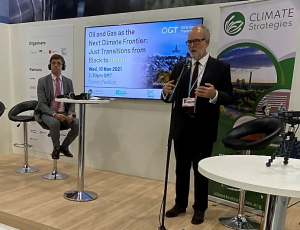 The opening remarks were delivered by Tomas Anker Christensen, Denmark’s Climate Ambassador, who told the story of how in 2019, the Danish government decided to end oil and gas production, and stop issuing new licences. They also worked alongside unions and companies in Esbjerg (their main harbour) to reach an agreement for a gradual transition from oil and gas, to offshore wind, carbon capture and storage and a new green economy. Denmark now wants to inspire other countries, and they are doing so through the BOGA initiative.

“We know how difficult it is to make such a decision, when you as a Prime Minister put it as leaving billions of dollars in the ground. But we think it is necessary, we believe the North Sea will transition from a fossil fuel ocean, to a renewable energy and offshore wind ocean.” – Christensen

I Panel: “Black to Green in Denmark: A Public & Private Imperative”

The first panel discussed the role of public and private partnerships (e.g., Climate Partnerships) in enabling Denmark’s oil and gas phase out commitment. It also explored some of the challenges for a just transition. 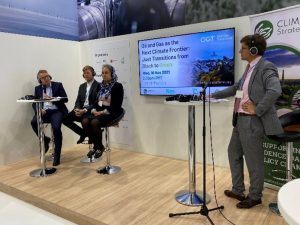 “The outlook is one of the tricks behind the model” – Simmelsgaard

The panelists described the close collaboration between Denmark’s government and the private sector as their biggest asset for an oil and gas just transition. They also highlighted the critical role of governments to provide clarity in the long term to achieve buy-in from different sectors. In Denmark, the government was clear when cancelling new licensing rounds for oil and gas and setting ambitious targets for renewable energy production. This allowed businesses to make investment decisions. Financial support from public and private investors (e.g. institutional investors) for emerging technologies was another important element.

Presentation: “A Just Transition for Oil and Gas in the North Sea: Lessons from Denmark, Norway and the UK” 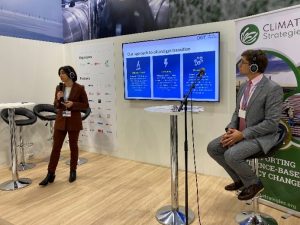 Gökçe Mete, Research Fellow at the Stockholm Environment Institute (SEI) & co-lead of OGT, set the scene for the second panel. She presented an overview of OGT’s evidence-based and co-production approach to oil and gas just transitions in the North Sea. She also highlighted some of its main preliminary findings in Denmark, Norway and the UK.

“In the North Sea there are very different countries, different stakeholders and different financial landscapes, so the pathways for the oil and gas transition are not a one-size-fits-all” – Mete

II Panel: “Co-creating evidence and pathways: Can Research Accelerate Policy Action for the Just Transition Beyond the North Sea?”

The final panel built upon the previous presentation and the panelists’ experience, to discuss the role of research in accelerating a just and timely transition for oil and gas. 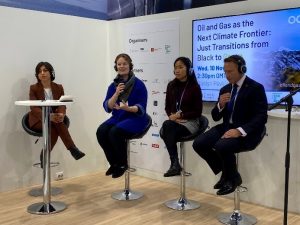 “It’s a really exciting time to be looking at this side of the world. There are big opportunities in the upswelling of language around the just transition, the awareness and the appreciation of the necessity of change that can help us getting the funding and the diversity of voices that we need in research. And also, in asking the difficult questions.” – Jenkins

“Can action wait for researchers?” and “what are key recipes for success when researching oil and gas just transitions and transition risks?” were the two key questions. Two main challenges were identified 1) how to get buy-in from stakeholders and 2) how to translate the experiences of developed countries in the North Sea into the realities of developing countries.

One of the main transition risks are stranded assets as the world moves away from fossil fuels, either through policy action or out-competition by renewables. For example, if a company or country commits capital to new fossil fuels infrastructure planned to run for 30-40 years, their value might decrease as renewables become more attractive.

As highlighted by Coffin, it is critical that developing countries learn from the experience of front-runners of the transition like Denmark, to avoid exacerbating the risks of their reliance on fossil fuel revenues. This is particularly important for petrostates like Angola, Nigeria and Azerbaijan, as well as emerging petrostates like Mauritania, Mozambique and Guyana.

“It is in the interest of the international community to support developing countries to move away from oil and gas, and to support these countries in a just transition.” – Coffin

The day was closed with an insightful conversation among ‘friends and family’ of the OGT programme at a dinner hosted by Climate Strategies, including various members of organisations working on oil and gas transitions from academia, government and civil society. 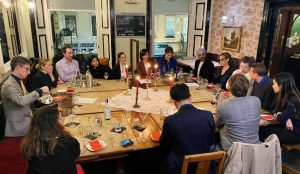