The future is Built on the Past: Just Industrial and Energy Transitions in the UK and Scotland 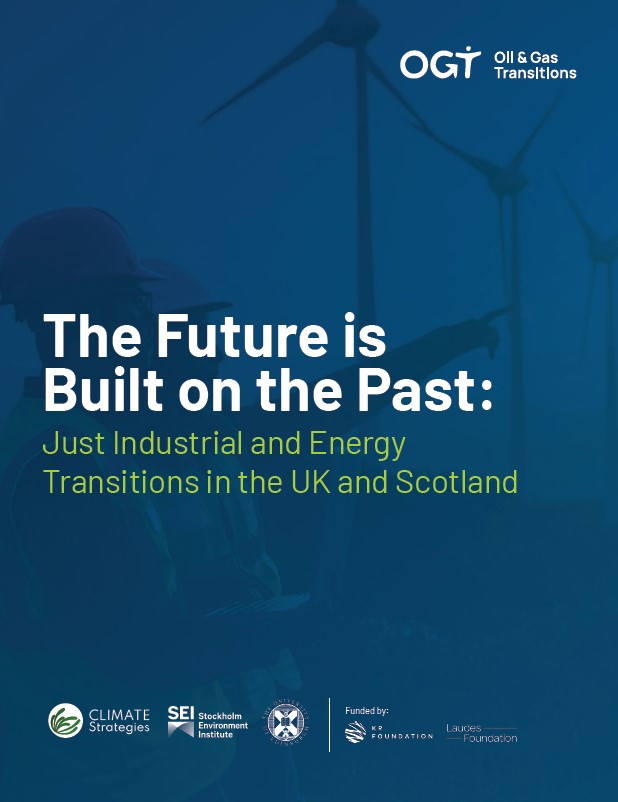 The UK’s oil and gas resource is in inevitable and predictable decline. The UK discovered abundant oil and gas in the 1960s and 1970s, with first oil delivered onshore in 1975. Oil and gas production peaked around 2000, and the UK was a global oil exporter from 1981 to 2004. In 2021, rates of oil production are in decline with 45 billion barrels of crude oil (bbl) already produced and just 5 to 9 billion barrels of oil equivalent (boe) remaining before 2050, but requiring substantial financial investment.

Renewable energy vectors are displacing coal and gas fuelled electricity: in 2020 they produced 42% of annual UK electricity. This transition to displace fossil fuel for electricity and surface transport will be largely complete by 2030. A transition of heat supply and industry will continue to 2050. Employment in the UK hydrocarbon sector is already rapidly decreasing.

The UK has experienced multiple technology transitions during its industrial evolution. Most have been driven by market forces and have been unmanaged, with minimal attention to social transitions and the re-use of skills and abilities. Transitions from heavy industry with localised employment, such as steel, shipbuilding and coal mining, were particularly severe, with many communities “left behind” and still suffering extreme social disadvantage.

In the offshore hydrocarbons industry, and related supply chain, employment age ranges span widely and its geographical distribution is spread across the UK with hotspots in northeast Scotland and east England. Many people work in supply chains to plan, design, finance, manufacture and deliver marine and onshore equipment to large and complex projects.

These existing skills are portable to diverse low-carbon developments in energy, industry and manufacturing. Consequently, the UK has an opportunity to re-deploy more than 200,000 people from a highly skilled workforce to gain an accelerated start with skilled people invested in Net Zero EU and global business. How these newly defined supply chain actors can break through to UK, EU and global market opportunities still remains poorly defined. Additional support is also needed to avoid premature failures in markets currently emerging. Public export finance support may need to be differently directed, in contrast to previous UK transitions.

The UK government is engaged in technology transition from the centre, and is making thousands of millions of pounds available to achieve net-zero carbon emissions targets and support low-carbon innovation and industrial developments. However there are significant and fundamental differences between the four nations of the UK. England has no narrative or investment on direct support for individuals and communities during the transition. Scotland has created a Scottish Just Transition Commission, advising a ministerial-level arm of the government reporting annually to parliament. In this context, there is continual feed-up from communities and dispersed local government to bid for tens of millions of Scottish government support.

Perceptions amongst those affected by the transition show that the complex and multi-layered governance of the UK is not well aligned to common goals. Enabling a transition with transparency and justice for individuals, communities and businesses is often conflicted between central government, which has financial and legal control, and local authorities, which have information and responsibility but insufficient power to act at the timescale and financial investment required. That contrasts with actions in Norway and Denmark, where regional and community actions have wider competences. Similarly, in the USA “Energy Community” budgets from Federal government are intended to directly reach into affected towns and cities.

It is clear that much stronger inter-government relations and constructive partnerships are urgently needed in the UK to bridge the gap between high-level policy intention and local level practical delivery. The UK government announced various policies during 2020-2021, including the Levelling Up Fund, the Lifetime Skills Guarantee and the North Sea Transition Deal. All of these have the potential to amount to a strong just transition policy. However, due to a lack of overarching coordination, these initiatives do not support one another and fail to support workers and communities.

Impressive statements on climate action from the UK central government are not matched with active devolution of integrated policy or funding, leaving market pressures to select winners. Within this policy void, companies and trade unions have begun to develop their own just transition strategies, policies and public positions, which inevitably leaves non-unionised casualties in social, business and resource skills. The lack of coordination and integrated policy also leaves space for litigation activism. This is exemplified by judicial review of the Oil and Gas Authority which has to enact Maximising Economic Recovery of hydrocarbons from the North Sea, whilst simultaneously decreasing the climate impact of continued production of fossil carbon. Policy gaps and contradictions, with accusations of too-slow action on climate, will lead to further activism and litigation, which will continue to distract the UK government from its central role of protecting and supporting its citizens by managing a coordinated North Sea and oil and gas transition that embeds social justice. When measured against just transition principles, the UK-funded North Sea Transition Deal meets just three.