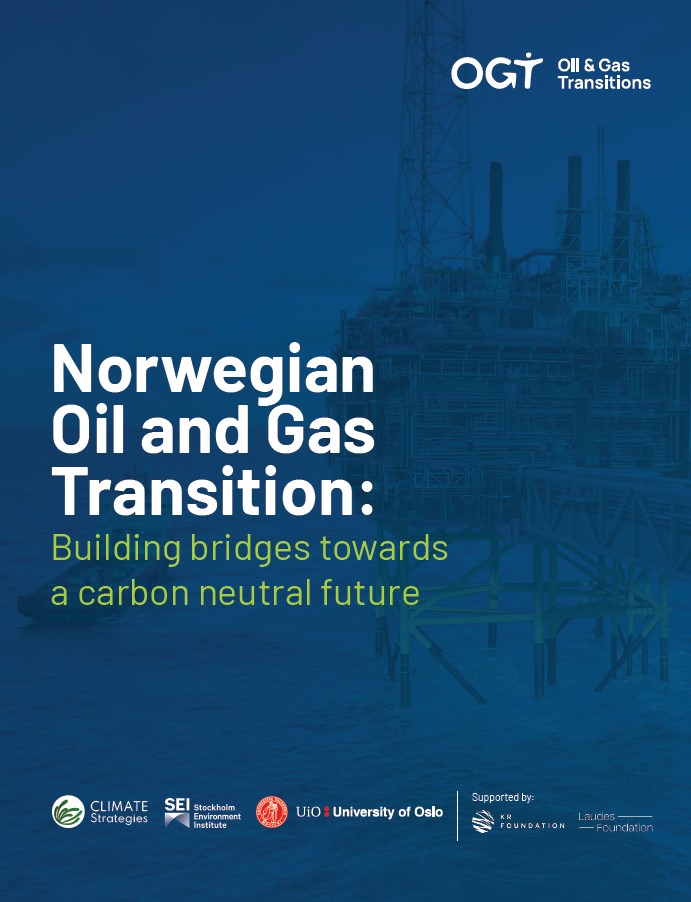 The oil and gas (O&G) sector is a major source of Norway’s national wealth and a pillar of its robust welfare state. At the same time, it makes a significant contribution to the global climate crisis. The oil and gas industry makes up 28% of the country’s total greenhouse gas emissions, the second-highest source after transport, and this is only counting emissions from production on Norwegian territory, not life-cycle emissions.

As the recent Production Gap Report 2021 attests, there is growing incompatibility between the global emissions reductions targets capable of stabilising dangerous climate change and the extraction of fossil fuels. In this context, the Norwegian political and business debate is visibly changing. Norway’s 2021 general election campaign, hailed as the first “climate vote” in Europe, galvanised the public by making climate pledges and the future of oil and gas key topics for discussion, and forcing all political parties and interest groups to take a stance. However, it is questionable whether the main goal should be to manage the decline of oil and gas or climate-related economic risks. If the future beyond 2050 is going to be net-zero, then relying on the fossil fuel sector as a pillar of Norway’s economy and society is unsustainable in the long run and carries significant risks that Norwegian decision makers need to mitigate.

In this report, we analyse the current situation in the O&G sector using up-to-date statistics and reports to map the landscape and key stakeholders and to provide background on the macroeconomic and socio-political issues at stake. Drawing on the analysis of party programmes, media coverage and interviews, we also lay out the current state of the political debate on the O&G transition, highlighting the main division lines among stakeholders that must engage in constructive dialogue to solve this complex political problem. We also map the position of industry associations and trade unions, the latter being key players in the Norwegian context.

Norway is highly dependent on oil and gas and while this is especially true for regions such as Rogaland, the impact of a rapid transition will be felt throughout the country. Oil is also important for Norway’s national identity, making the phase-out proposal politically controversial and sensitive. This report identifies two coalitions of political actors: one siding up with the interests of the industry and the other focusing on the need for climate action. Following the recent election, the pro-industry coalition is stronger, boasting 136 seats in the Norwegian parliament against the pro-climate coalition’s 32. However, internal dynamics within the Labour Party, which secured the most seats in parliament, alongside the pivotal role of the pro-environmental Socialist Left and other parties, whose support the minority government will need, may unlock opportunities to start a gradual transition in the sector. The first issue will be that of new licences for oil and gas exploration.

Although the oil and gas transition in Norway is politically divisive, almost all stakeholders agree on its key elements. These include the development of offshore wind, carbon capture and storage (CCS) and hydrogen as alternative technologies. What the stakeholders differ on are the speed and sequence of the transition, and the role of regulatory limitations on oil production as a means to achieve it. Attempts to engage in cross-sectoral dialogue have been made by both the pro-industry and the pro-climate coalitions, but they have rarely managed to cross the main division line.

The report identifies four plausible paths that Norway may follow, each associated with different risks and opportunities. These paths are shaped by political choices, but also external forces beyond the control of Norwegian stakeholders. We argue that a cross-sectoral dialogue connecting actors across the political divide can generate transition scenarios that are resilient to external risks by taking the ultimate need for decarbonisation and a just transition as reference points on which all stakeholders can agree. The project’s next steps will be to nurture such dialogue, build trust and draw lessons from the experience of other North Sea countries.