North Sea Oil and Gas: Transition from a Regional and Global Perspective 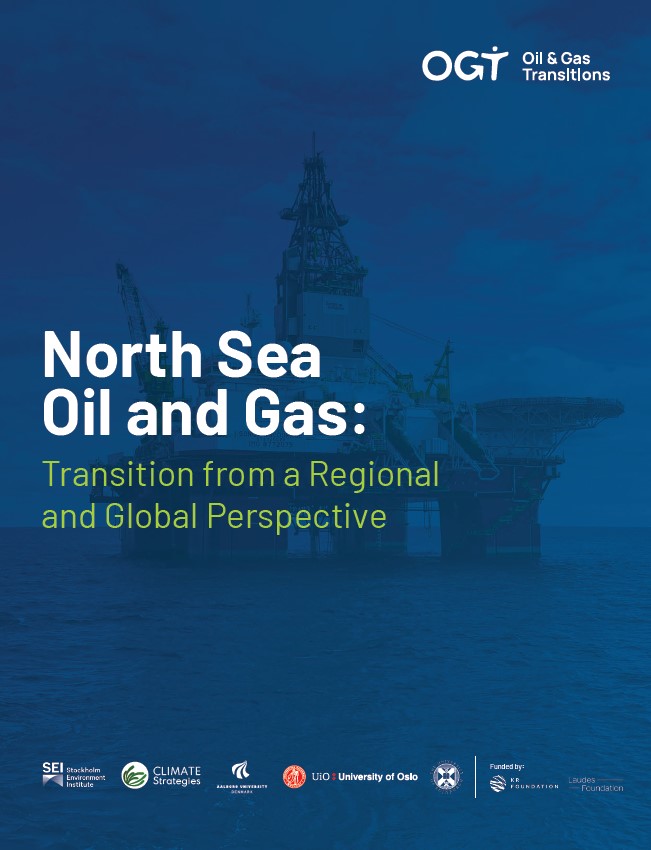 The oil and gas industry must play a big part in the world’s efforts to meet its climate goals because of the greenhouse gas emissions associated with production and consumption of these commodities. Recent data from the International Energy Agency urges countries to stop new oil and gas production licenses after 2021. However, governments are moving ahead with plans to produce significantly higher volumes of oil and gas in 2030. This production gap is increasing year on year, putting at risk efforts to hold global average temperature increase to well below 2°C above pre-industrial levels, let alone limiting it to 1.5°C.

Reducing and phasing out oil and gas production has been rising higher on the global agenda, although meaningful progress has been difficult to achieve. Oil and gas commodities have created decades-long dependencies throughout most of the world’s economies, both for consumer and producer states.

Today the benefits of a low-carbon society are well-known. Energy transitions can enhance human well-being through reduced air pollution, increased energy access, and by creating
local jobs and generating income for local communities (IRENA, 2022b). The diversification of energy mixes and economies reduces the risks posed by fossil fuel dependence and decreases import bills and therefore household energy expenditure (OECD/IEA & IRENA, 2017). Renewable energy prices have been more stable during the Covid-19 pandemic than oil and gas prices. And in several parts of the world, especially in developed countries, renewable energy investments have been delivering higher margins of return than fossil fuels (Mete et al., 2021). Despite this, inefficient subsidies, lack of international cooperation, jobs and key sectors tied to the sector, and geopolitical and political factors have all combined to create barriers and resistance to change.

Furthermore, at the same time as scientific evidence and citizen and civil-society campaigns are mounting and global initiatives and alliances to put an end to oil and gas production are on the rise, there is not yet a successful example of a just transition away from oil and gas that countries can learn from and be inspired by.

Even in Europe, which aims to become the world’s first climate neutral continent by 2050, and where oil and gas producing nations have individually committed to ambitious carbon neutrality targets, oil and gas expansion plans remain in the UK and Norway, with only Denmark setting any ambition to phase out the industry. In all these three countries plans and actions are focused on reducing emissions within oil and gas operations through process efficiency improvements, electrification and in building low-carbon capability (e.g. carbon capture and storage and hydrogen production).

The three North Sea oil and gas producing nations have the necessary finance and economic diversity, technical knowledge, and ample renewable energy capacity to enable them to break the path dependency between economic development and oil and gas related industries. Yet there is considerable resistance to doing so from companies, governments and communities, largely due to concerns and uncertainties over costs and impacts. For example, while phasing out fossil fuel extraction will bring a multitude of societal benefits, not everyone will benefit equally from the transition – and those who depend on the industry for their livelihoods or for development could lose out.

Indeed, one should not assume that all of the oil and gas jobs lost could be replaced by alternative energy and low-carbon energy technology solutions. Many oil and gas jobs are also very lucrative due to high revenue margins and tougher living and working conditions in oil and gas fields. While the same cannot yet be expected from the low carbon energy value chain, it must be noted that the low carbon and renewable energy sector can also create high value and skilled jobs. In fact, in 2020, jobs in the renewable energy sector have been the most popular energy sector jobs globally, in terms of switching employment (Statista, 2022a).

Aside from those who lose jobs, there will inevitably be others who lose out from the change due to the geographic location of new energy infrastructure and age of the workforce, among other factors. And parts of the oil and gas value installations and engineering structures cannot be transitioned at all and will need to be decommissioned. Regardless of this, education, compensation and reskilling programmes must all be part of early planning for just transitions. Supporting oil and gas companies by providing market certainty and a phase-out date could help them reorient their business models and enable countries to reach net-zero emissions from a domestic production perspective.

Therefore, strategies to phase out oil and gas must also be just and equitable. Addressing these concerns and overcoming the “ambition gap” can only happen through greater policy coherence between greenhouse gas emissions targets, increased policy support for an orderly phase out and managed reorientation, and increased policy support for just transition initiatives.

SEI and Climate Strategies are leading an evidence-based programme – Oil and Gas Transitions – together with the University of Edinburgh, the University of Oslo and Aalborg University. This project focuses on the opportunities, barriers and co-produced pathways for oil and gas just transitions in the UK, Norway and Denmark. The project’s theory of change is based on the assumption that these countries can spearhead a just transition for this sector and can offer lessons to other oil and gas producing countries beyond the North Sea (Mete et al., 2021).

This report is part of the Oil and Gas Transitions project, which began in 2021. The report consists of two parts. The first focuses on narratives of oil and gas transition around the globe and provides an overview of the existing oil and gas dependencies and policies that create barriers to the transition. It also illustrates the opportunities to move away from oil and gas driven by global, regional (EU) and national level initiatives, such as increasing the number of moratoriums on production of these commodities. This first part of the report also places the special case of the North Sea producer states in a global context to emphasize why the world will be closely watching the UK, Denmark and Norway.

Over the past year, the three universities mentioned above carried out country case studies, which explored stakeholder perspectives, socio-economic considerations, the political landscape, and opportunities and barriers to a just transition from oil and gas in Denmark, Norway and the UK. The second part of this report synthesises these three case studies and compares them, along with a scorecard analysis of how their policies measure against each other in their pathways to a just transition.

We found that all three countries have gaps when it comes to policies aimed at ensuring a just transition. Scotland receives the highest score in our analysis but does not have devolved powers over oil and gas production, which means they cannot be assessed for some of the criteria.

The other North Sea countries are especially lacking in policies targeting support to people, communities and regions affected by the transition. Denmark benefits significantly from decisive decarbonization targets, an end to new licenses for oil and gas production and more targeted renewable energy investments in the country’s oil and gas region to transform the economy. The fact that neither the UK or Norway have targets to stop producing oil and gas makes it hard for them to properly plan for a transition and lowers their overall score.