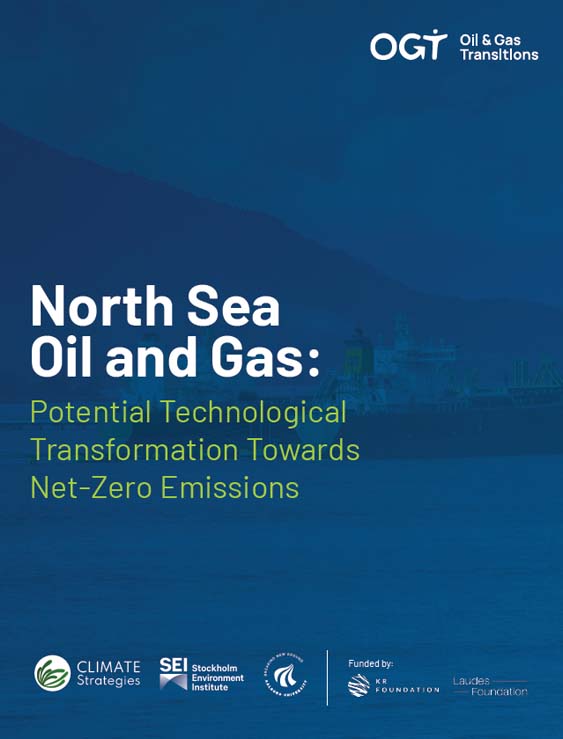 Denmark, Norway and the United Kingdom have been extracting oil and gas from the North Sea since the 1970s. Historically this has had a major impact on their economy and on the welfare of their society. The innovation brought about by new technologies has been key for the success of producing oil and gas in the North Sea. But as the energy sector of the region enters a new era that involves gradually abandoning fossil fuels to meet the objectives of the Paris Agreement, offshore oil and gas’ technological innovations face the critical juncture of determining whether they can be transferred to another industry. The just transition that has already been initiated in the North Sea requires phasing out oil and gas and large investments in the low-carbon economy. In such a context, the technology transition in the industry can become key.

This report aims to map the most important stakeholders and technologies involved in the North Sea offshore oil and gas industry. As the technological transition in the sector can take place in many forms and sizes, this report focuses on two different case studies where it can play a role in the future North Sea energy systems:

Carbon capture and storage in offshore oil and gas fields features in greenhouse gas emissions reduction strategies in all three countries. Several projects have already been initiated in Europe, and billions of USD in investments have been announced by the EU, Denmark, Norway and the United Kingdom. Many of the projects intend to use depleted oil and gas reservoirs and to repurpose platforms and infrastructure to store CO2 offshore, with the oil and gas operators as partners.

The use of offshore oil and gas platforms as energy hubs follows the same technology transition logic. Offshore platforms, in particular, could become part of the future distribution network as energy hubs, together with the artificial energy island announced by the Danish government. Other pilot projects are investigating whether it will be feasible to reuse the platforms and related infrastructure for Power-to-X production in the future.

The two case studies show that repurposing offshore oil and gas platforms and infrastructure can be considered as part of the just transition to a low-carbon economy. However, to fully understand the extent of the industry’s technology transition, from the infrastructure to the workforce, further analysis is needed into the legislative, financial and political considerations that will determine just and feasible pathway scenarios for the phasing out of offshore oil and gas production in the North Sea.