You can watch the recording of the webinar below:

Moderated by: Åsa Borssén, Program Coordinator and host at Highgrade

Summary of the event 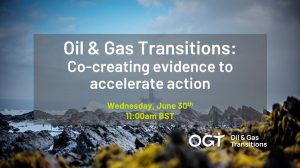 The North Sea is an intensive region for oil and gas exploration and production, with the UK, Norway and Denmark as major players in exploiting those resources. They remain the three top oil and gas producing nations in Europe despite their ambitious climate neutrality commitments aligned with the Paris Agreement.

A transition out of oil and gas is the next required frontier for their targets to be realised. If the right measures are taken by both the industry and policymakers, the North Sea has the potential to lead this transition fairly and timely, while becoming a hub for renewable energy innovation and production.

During the event we discussed: